Since 1st January I’ve been making an effort to notice something about nature everyday… It started on an impulse after I saw a tweet from Kate Macrae that simply said:

“Every day, take a moment to notice nature… a simple task proven to improve mental health.”

It made me stop and think… I spend a lot of time outdoors, I love walking and foraging, I’m always noticing birds, plants or fungi when I’m out and about… but mostly the observations pass through my mind so quickly that I don’t always pause to really appreciate the beauty and wonder of the things I’ve seen… and until now, I certainly haven’t done this everyday. I realised there was a missed opportunity here to be more mindful, to practice gratitude and appreciate the small seasonal changes that pass by each day without ceremony.

Those who have followed my blog or know me personally will already be familiar with the importance of ‘true rest’ – when our minds are still, focused and clear of distractions or ‘busyness’… nature provides endless opportunities for this kind of peace and stillness.  Incorporating even just a few minutes into your daily routine can really improve not only your mental health but your overall well-being and approach to life in general.

I’ve been using my twitter account to log my daily observations and photos but thought a monthly round-up of the things I’ve noticed would make a nice feature here too.  If you feel you’d like to add more nature appreciation to your own lives, then I hope my experiences will help guide you through the seasons and inspire your own mindful moments. 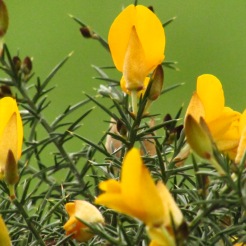 So what have I noticed so far….

The earth may be still asleep as we began a new year but there’s still plenty of life and colour around… you just have to look a little harder sometimes.  Red rosehips are in abundance at this time of year and give colour to the hedgerow, alongside the bright yellow flowers of gorse bushes.  We’ve had quite a bit of snow this year, bringing opportunities for snowy walks, sledging and building snowmen… or just pausing to feel the snowflakes as they gently land on your face.  Icy rain and wind might not be so much fun but still awaken the senses and redden the cheeks!  The frozen ground is tough on our wildlife though, as birds and mammals struggle to find food and water.  I’ve taken so much pleasure in feeding them this year and watching the robins, blue-tits, blackbirds and starlings (to name a few) that flock to feast by my window… and the mischievous squirrels that try to get in on the act too.  I took part in the RSPB’s ‘Big Garden Birdwatch’ – indulging a whole hour of gazing into the garden while sipping a cup of warm tea – and have been lucky to spot wrens, chaffinches and even a woodpecker on one occasion.

Dewdrops, spectacular icicles and intricate patterns in the morning frosts all bring small moments of wonder… Dying ferns, teasels and other seed heads provide shelter for insects over the winter months, while new life can be spotted in baby hazel catkins, and when the snowdrops start to flower you know Spring is just around the corner!

For me, 1st February symbolises the start of spring and this year it was met with beautiful blue skies, new shoots in the garden and the first time this year I felt the warm rays of the sun on my face… only for us to plummet into another deep freeze a few days later!  The joys of British weather!!  Crisp frosty mornings and sunlight glistening across a frozen pond… spotted a kestrel whilst out walking and some fascinating fungi on a forest log-pile.  Many mushrooms survive the winter months, Oyster Mushrooms and Velvet Shank being two edibles I’ve not spotted yet this year, but plenty of Jelly Ears around and the striking Scarlet Elf Cups.

Mid-month Spring arrived at last… crocuses, tulips and hyacinths broke through the dormant soil to join the primroses and snowdrops now in full bloom.  New buds sprouting on the trees, soft pussy willow bursting open and hedgerows filling up with new growth of cleavers, nettles and cow-parsley.  Birds are starting to pair up ready for mating season… the single Robin that has been a regular garden visitor is now two Robins, along with two Dunnocks and two Starlings… and I’ve spent many mornings listening to the different tunes they make – many of which I can now identify quite confidently.

It’s been great to get out in the garden these past couple of weeks… warmer temperatures have forced through the rhubarb and I’ve started clearing some of the veg boxes and beds ready for planting next month.  Meanwhile in the woods the first wild garlic has started sprouting in abundance… too small yet to gather but I’ll be heading back for that in a few more weeks.  The unusually warm weather we’ve had this past week has seen butterflies and bees emerge from hiding and I spotted my first wasp.   I’ve had a peacock butterfly hibernating in my garage since December but on Friday he/she decided it was time to move on. 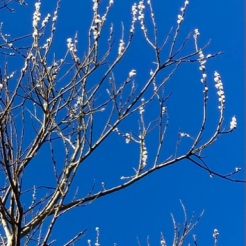 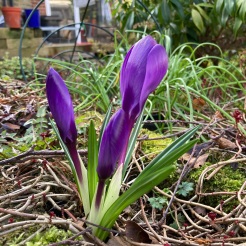 Peacock and Small Tortoiseshell butterflies are the most common ones to find hibernating in our homes… they come indoors around October time looking for somewhere safe and dry to spend the winter – sheds and garages being ideal – as the cooler temperatures put them into a state of dormancy and they effectively ‘sleep’ until spring.  This is all well and good until the weather drops even colder in December and we crank up our central heating.  Depending on where the butterfly has chosen to hibernate this sudden warmth can wake them up too early and that’s what happened with my little Peacock.  I don’t know where it came from but it was fluttering around our solid glass basement door on a cold winter morning with the first dusting of snow outside!  Had I opened the door, the freezing temperatures and lack of food or water would have given little chance of survival.  So I caught it and put it in a small loose lidded box where it calmed down very quickly.  I popped the box in our nice cold garage and when I checked back an hour later it had gone back to sleep… hanging from the lid of the box… where it has stayed the past two months.

February is quite early for butterflies to come out of hibernation, it would usually be towards the end of March or into April, but as the temperatures have been so warm lately I started checking on it every few days… last thing I wanted was for it to wake up in search of food and be unable to escape.  I had noticed that it had been moving positions, and therefore starting to rouse, but on Friday when I lifted the lid it stretched and fluttered it’s wings.  I took it outside and into a sunny spot where it slowly started to first walk around a little, then open and stretch it’s wings, warming itself in the sunshine.  I fetched some sugared water but came back just in time to see it take off… flutter around my head a few times before heading down the garden… and just like that it was gone!   I’ll admit I was a little sad… not knowing where it was going or how long it would survive… but it’s in nature’s hands now and I feel honoured to have had those special moments, watching it slowly awaken in my hands… studying the amazing colour of it’s wings as they shimmered in the sun… and the excitement as it instinctively took flight.

Caring for nature brings so many rewards and I look forward to seeing what the next month brings!!